Welcome to the October newsletter of Stay Grounded!

We are back from our summer break, like all of us. For most people this summer was a special one, and because of the pandemic it was definitely one with far fewer flights than in recent years. Our goal: keep air traffic low and at a necessary minimum, not just in extraordinary situations like this one. But we must beware of the airline industry, which is using illusions of green technology to lobby for a return to business as usual.

Besides information on how to counter the industry’s green lies, this newsletter features a glimpse of recent actions at airports in France and Mexico, a review of our last webinar, information on our newest members and links to many interesting articles.

This time we would also like to ask you to support Stay Grounded with a donation if you can. Even a small contribution helps us to continue our campaigns, awareness raising and networking. We are in an important time to reduce air traffic, so your help is more important than ever!

STAY GROUNDED is a Europe-based, people-powered, science-based, and action-oriented network for more than 150 member initiatives around the world, including Flight Free Australia. The network fosters mutual support and exchange of experiences, and campaigns for a reduction of aviation and its negative impacts, as well as against problematic climate strategies like offsetting emissions and biofuels. Join our efforts for a just mobility system that works for all, now and in the future. 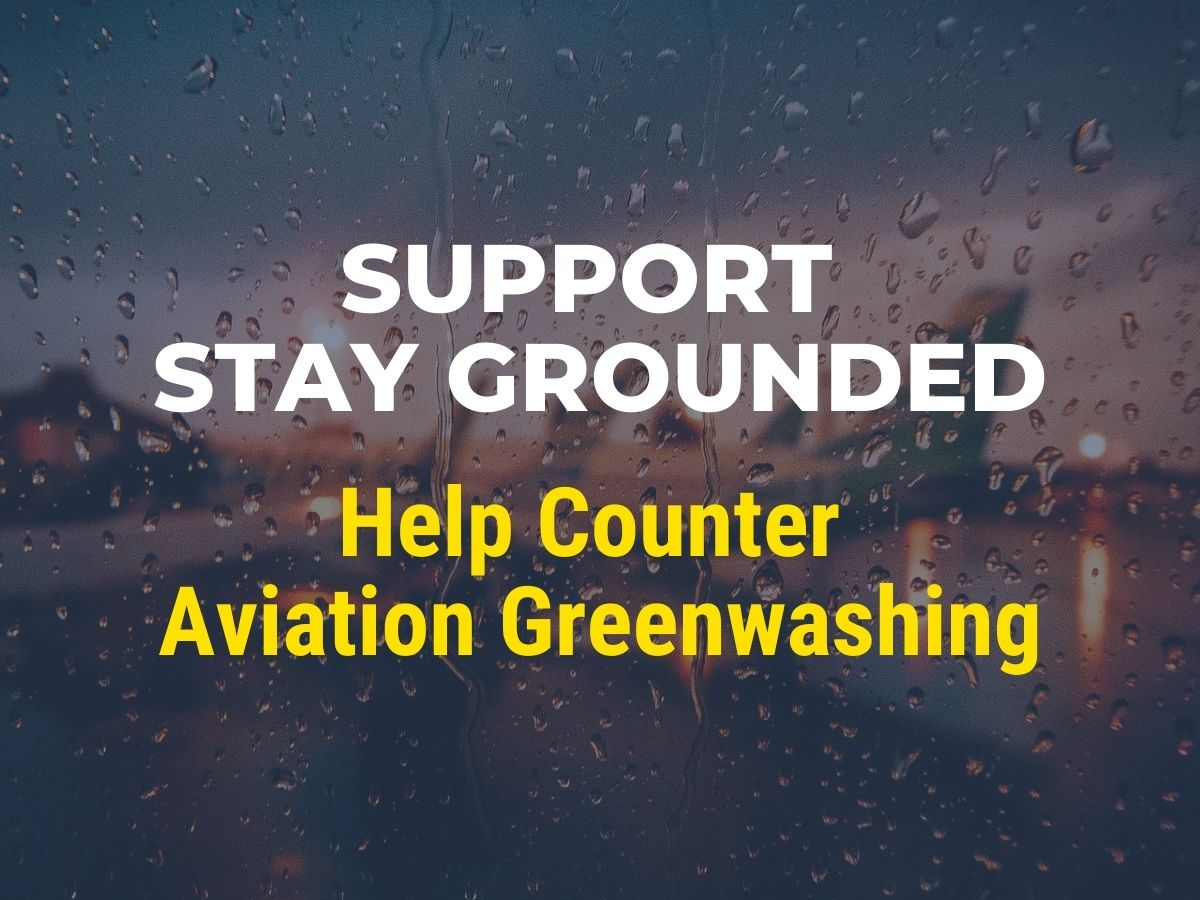 In September, Airbus announced its intention to build hydrogen-powered aircraft by 2035. Hydrogen is just one of the various technological “solutions” for the climate impact of the aviation industry.

The problem: waiting for such technologies prevents effective climate action today. Actually, the industry is actively using them as an argument when lobbying against serious mitigation measures. Disruptive technologies have been announced in various sectors for decades, and the world is still waiting for the vast majority of them. In the meantime, emissions continue to rise. For example, airlines have not been meeting their own low targets for (harmful) biofuels for years. Why would they do any better in switching to hydrogen?

Also, there are no regulations to encourage airlines to switch to hydrogen aircraft. The only climate instrument for air traffic, CORSIA, is useless and has recently been weakened even further. Why should airlines switch to more expensive hydrogen aircraft? And even if they would initiate the switch after 2035, it would take decades until it is completed. But we have to start the path to zero emissions now, not in a distant future.

Perhaps the biggest problem about hydrogen is it’s energy intensive to produce, and aviation at pre-Covid levels would need an enormous amount of it. Emission reductions would only be possible with ‘green’ hydrogen from renewable energies. We are already struggling to develop enough renewable energy systems. We should not waste precious energy on a relatively luxurious activity of a global minority.

Finally, aircraft also contribute to climate heating through other emissions. Using hydrogen would reduce the CO2 emissions, but it is not clear if and by how much aviation’s non-CO2 effects, can be reduced by using hydrogen. After all, burning hydrogen emits water vapour, which is a potent greenhouse gas.

Such greenwashing by the industry must not be left unchallenged. As Stay Grounded, our aim is to point it out and criticise it, as well as to promote real alternatives. For this we need your help! Unlike the aviation industry, we have neither multi-million budgets for PR nor armies of lobbyists. To make up for this, to finance our campaigns and our information work, we need your donation. Every small contribution makes a difference!

Thank you for your help!

In Focus: Greenwashing and Myth Busting 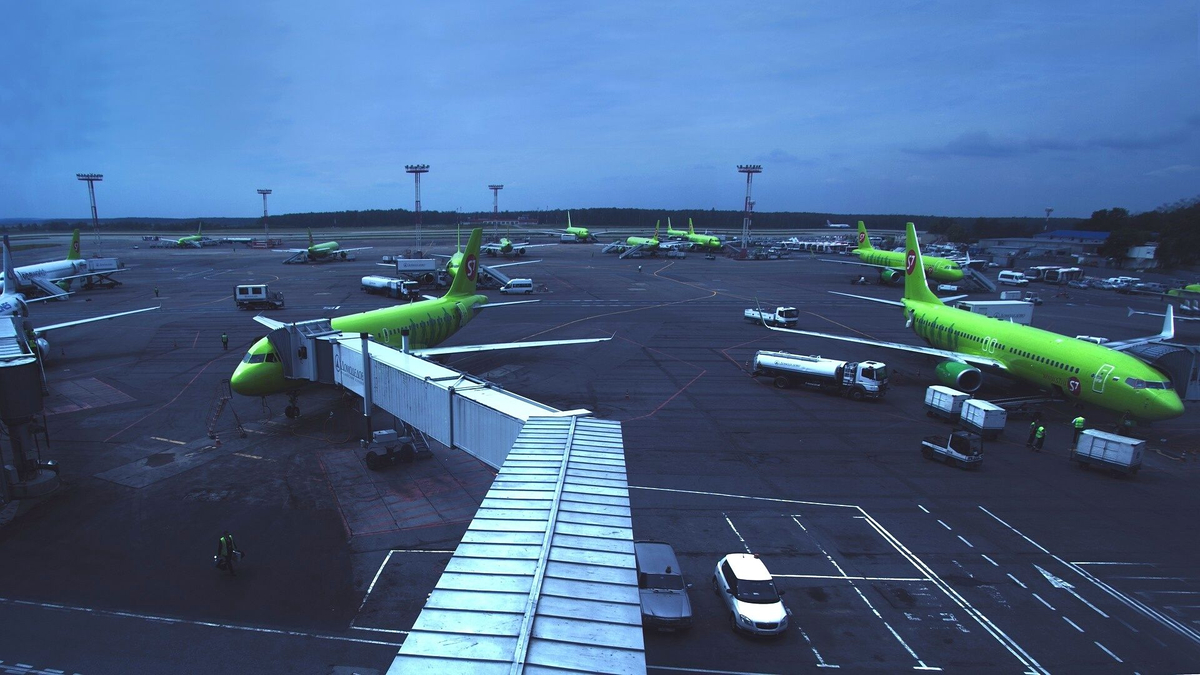 Analysis. E-fuels such as hydrogen or synthetic fuels are increasingly being mentioned as the future technologies of aviation. But how realistic is it that air traffic will soon be powered by e-fuels? Read our analysis. 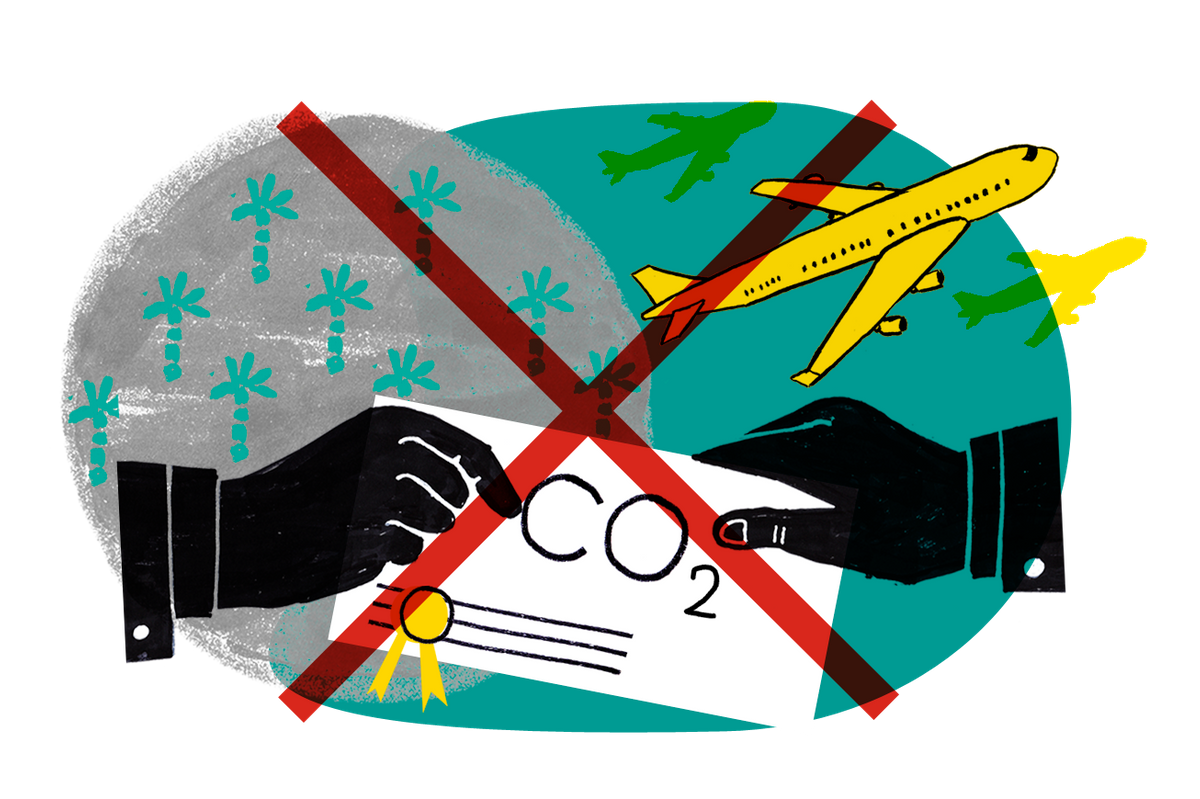 Offsets. Offsetting emissions from flights is heavily promoted by the industry. However, offsetting generally means no real change in behaviours and policies, and is virtually useless in terms of emission reductions. 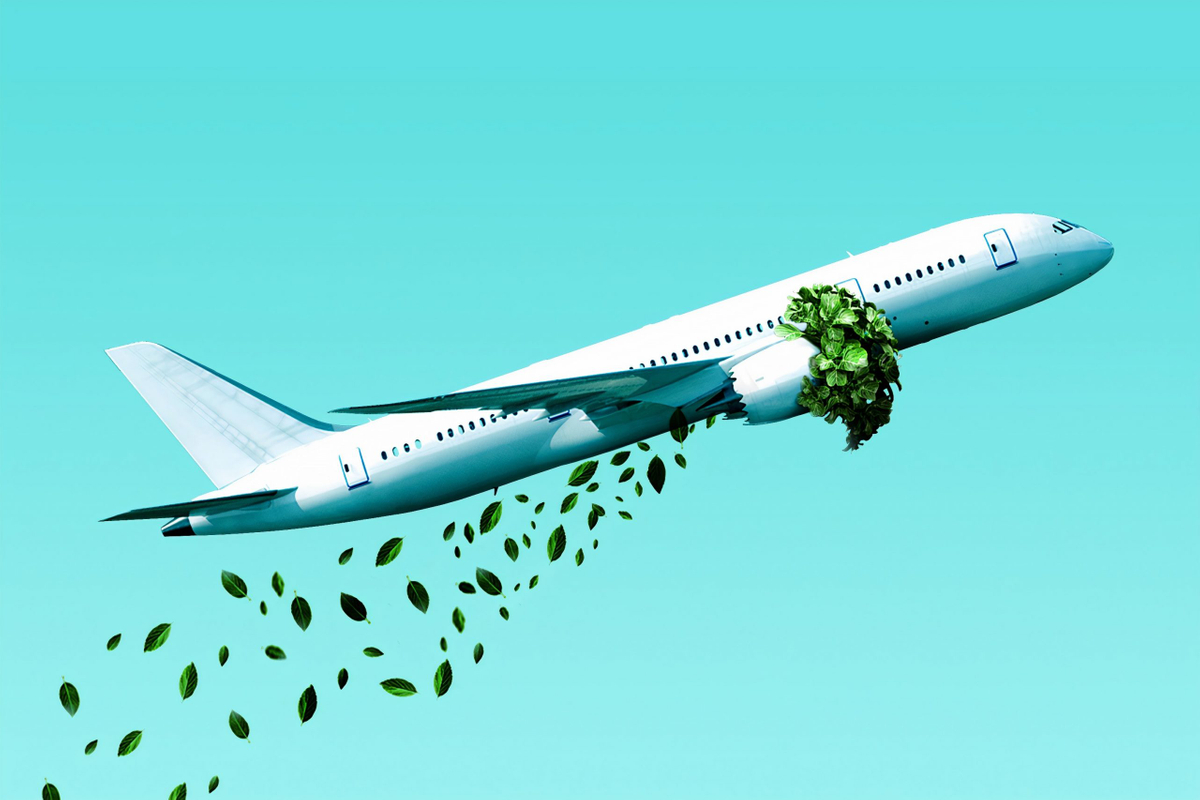 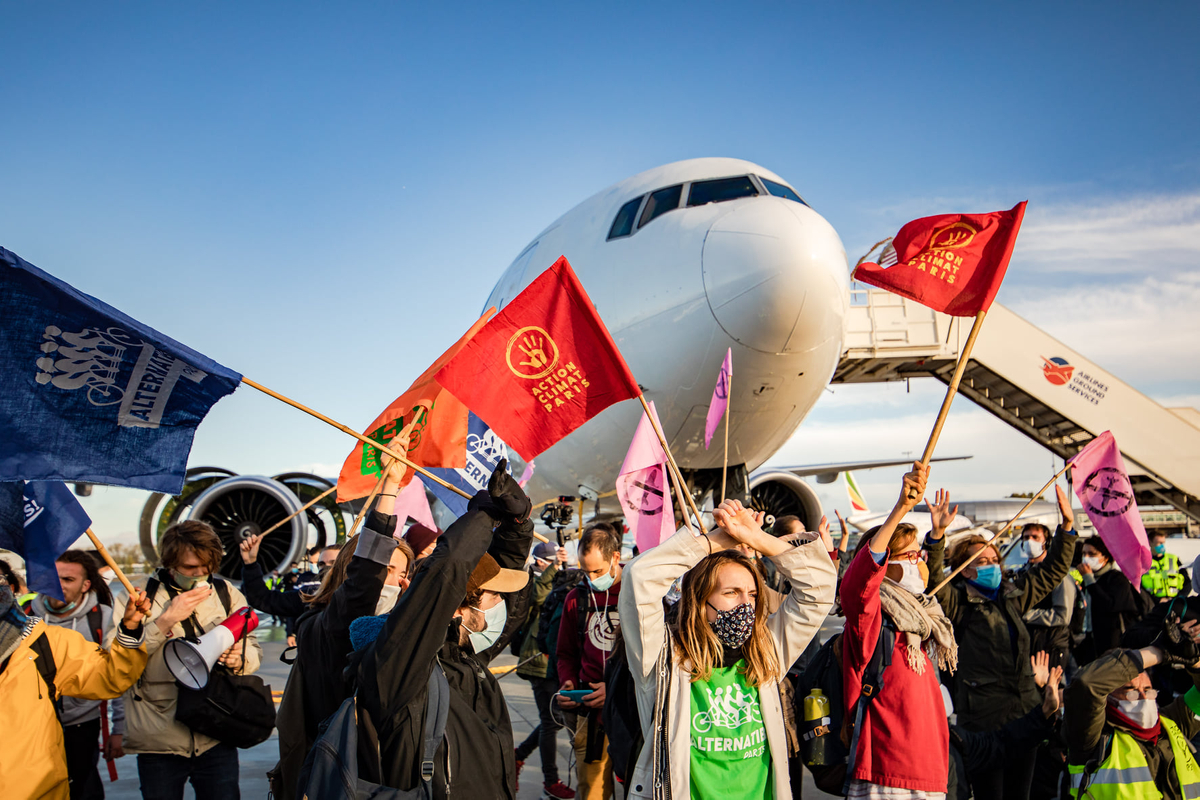 Actions. “Using public money to keep afloat an industry incompatible with the safeguarding of decent living conditions on Earth – our answer is no”, say Stay Grounded member organisations Action non violente-COP21 (ANV-COP21) and Alternatiba, and they called for a march on airports throughout France on the 3rd October.

So last Saturday, in Paris, Nantes, Montpellier, Tours, Besançon, Tallard and other places, about 2,000 people participated in actions at airports to stop air traffic and to stand up for a just transition of the sector. There were also solidarity actions taking place in Mexico and Belgium. The actions were covered by many media, including here in Le Monde (French). Read also our short summary. 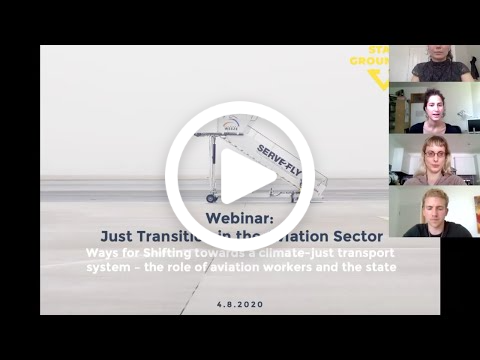 Webinar. In August we held a webinar on how a just transition of aviation could be organised. Inputs by a pilot, a trade unionist, and activists from the Dominican Republic and UK allowed for a broad range of perspectives and an interesting debate. Find a video and a written summary on our website.

We welcome our newest member organisations 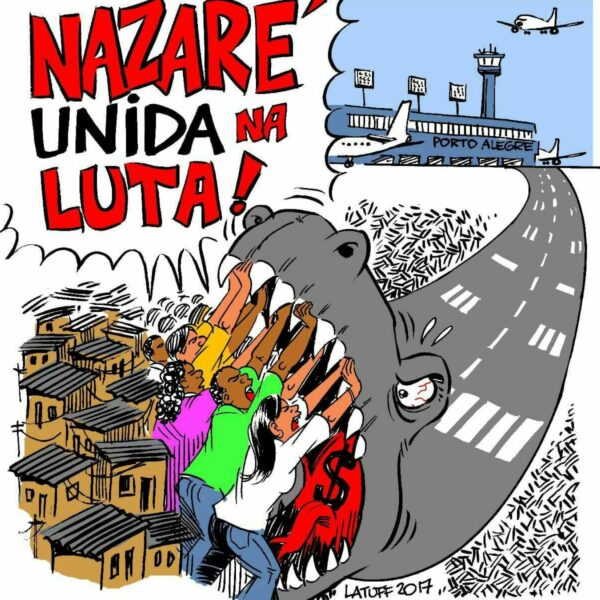 Homeless Workers Movement (Movimento dos Trabalhadores Sem Teto – Rio Grande do Sul, MTST-RS), Brasil. MTST-RS, is part of a national movement that has been organising urban workers for more than 20 years at the place where they live – the outlying neighbourhoods of Brazilian cities. MTST-RS supports the community of more than 2000 families that have been dispossessed for an airport expansion, principally for cargo purposes, at Vila Nazaré, Porto Alegre. The airport project was outsourced to Frankfurt Airport (Germany) in 2018. Read more about FRAPORT’s destruction in Vila Nazaré. 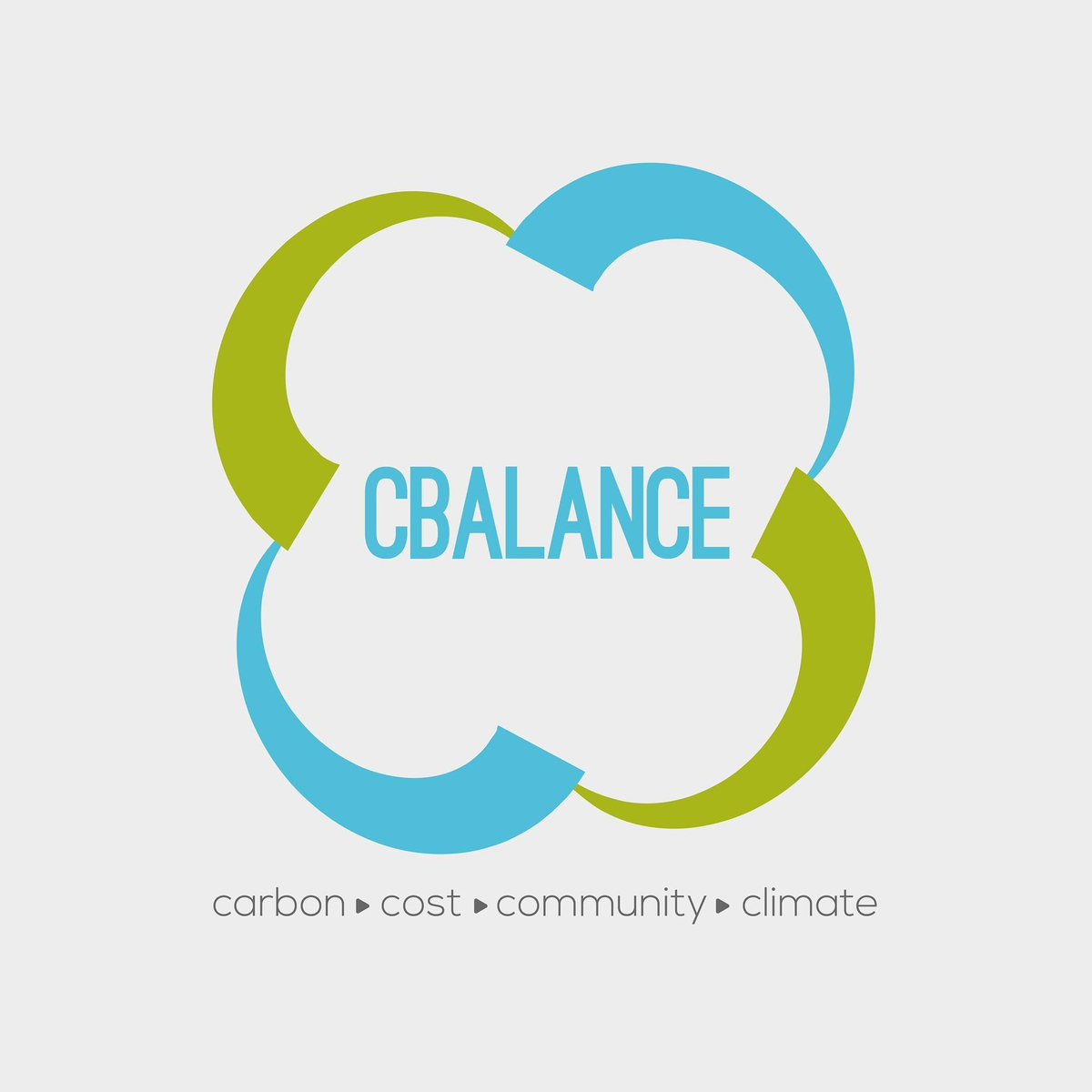 cBalance Solutions Hub, India. cBalance creates tools for, and consults industry, institutions and consumers, with the focus on development of greenhouse gas and ecological footprint mitigation roadmaps to promote sustainable development of all human communities and their interrelated ecosystems. In their recent project cBalance seeks to reduce work-related flights of Indian IT companies. Check out their website. 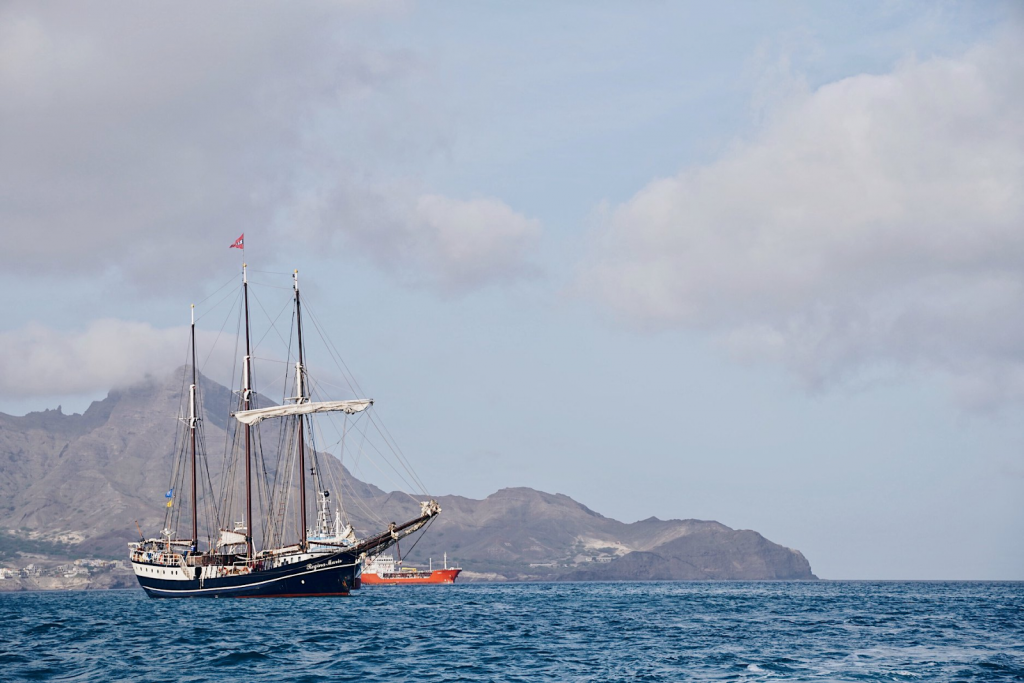 Grounded story. Rosa Hofgärtner from ExPlane shares the adventurous journey she undertook together with fellow environmental activist travellers in the project Sail to the COP – and the inspiring results of this sailing trip. Read it here. 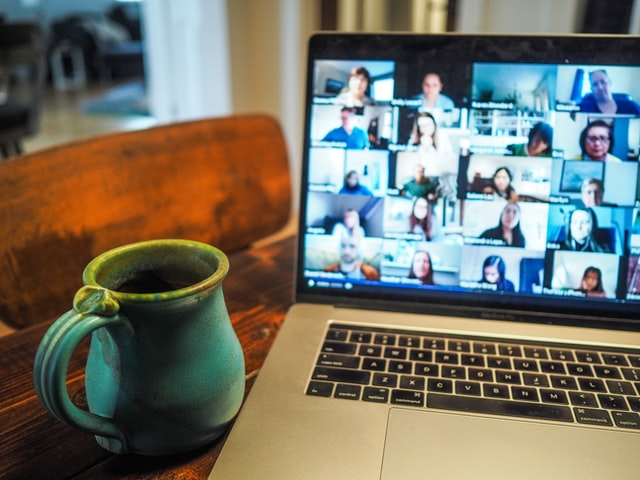 Stay Grounded in the Media

A glimpse of media coverage about the Stay Grounded network and our campaigns. For more content (also in other languages) visit the media review on our website.

Our highlights: what is going on in climate politics, the aviation industry, climate science and the climate justice movement.

The Guardian: Inside the airline industry’s meltdown

Donations
For our actions, meetings, solidarity work and coordination of the network, we need funding. Support the movement to reduce air traffic – make a donation!

The Stay Grounded Network is hosted by the Austrian NGO Periskop:

If you do not want our newsletter to end up in your spam, please add our address info@stay-grounded.org to your address book.