International aviation’s emissions are poorly regulated. The industry’s Carbon Offsetting and Reduction Scheme for International Aviation, covers less than 5% of projected CO2 emissions through to 2050. Meanwhile the industry pays no fuel tax on international flights.

In 1997, the group of 191 nation states, party to the United Nations Framework Convention on Climate Change’s Kyoto Protocol and not including Afghanistan, Sudan or the USA, agreed that greenhouse gas emissions from international aviation should be ‘limited’ or ‘reduced’ by developed countries working through the ICAO. But it was only in October 2016, after 20 years of growing emissions, that the ICAO announced a Carbon Offsetting and Reduction Scheme for International Aviation (CORSIA).

CORSIA is aimed at “stabilizing the sectors’ global CO2 emissions” — originally at 2020 levels. But because the pandemic dramatically reduced flights and therefore emissions in 2020, the industry chose, in June 2020, to stabilise emissions at the higher level reached in 2019. CORSIA also aims to achieve “A reduction in net aviation CO2 emissions of 50% by 2050, relative to 2005 levels.” ATAG Executive Director Michael Gill says these measures, “ensure that the aviation industry can continue to grow sustainably.”

CORSIA’s measures include technological measures, the use of alternative ‘sustainable’ fuels, operational improvements on the ground, and a carbon trading scheme for offsetting emissions called the Market Based Mechanism (MBM). 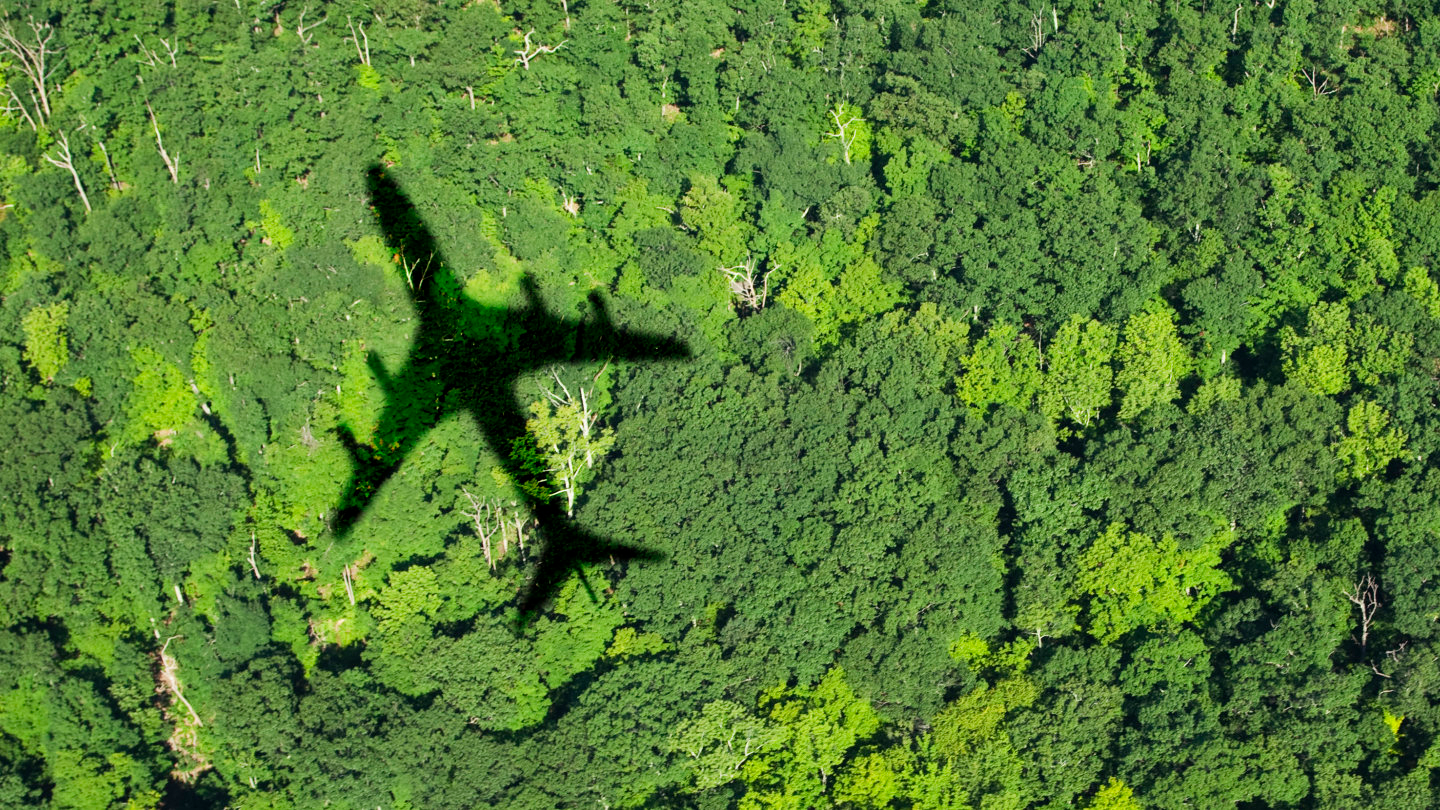 Users of carbon offsetting schemes create carbon emissions themselves, but offset — that is, pay others for — equivalent emissions those others either avoid making or draw down from the atmosphere. Carbon emissions can be avoided by either using less of the thing that creates the emissions (say, cutting back on trips by plane or avoiding land clearing) or doing the same thing but with non-emissions technology (say, powering an electric car with renewable electricity). Carbon emissions can be drawn down through re-afforestation, regenerative agriculture and other practices. In the aviation sector, users of carbon offsetting can be passengers paying extra on their ticket, airlines in the EU ETS, or, after 2027, those in the ICAOs CORSIA MBM.

For the aviation industry to take the credit for another sector’s avoided or drawn down emissions allows aviation to shirk its responsibility to rapidly reduce its own emissions.

The integrity of offsetting schemes need to be questioned. Are claimed-for avoided emissions actually avoided? Would the claimed-for avoided emissions have been avoided anyway through existing land-use practices? Were farmers thrown off their land to make way for claimable carbon sequestration-enabling emissions drawdown? Were claimed-for drawn down emissions actually drawn down? Were the trees planted? Did they grow for as long as the period claimed? Did a subsequent drought kill them? Does the price of carbon in the trading scheme, the cost of the carbon offset credit, or the carbon tax on the passenger seat, reflect the real cost of militating the damage caused by those extra tonnes of emissions?

Step 2: Set an irresponsibly small emissions reduction target so the amount of emissions needing to be offset is not onerous

The UN says a reduction target of net zero CO2emissions by 2050 aligns with a 50:50 chance of avoiding warming above 2ºC. But, as Greta Thunberg and others have reminded us, the UN didn’t include in its risk assessment of the 2050 net zero CO2 target, the likelihood that man-made warming of under 2ºC could trigger climate tipping points. So net zero CO2 by 2050 has even less than an even chance of preventing +2ºC of warming. In the face of this CORSIA’s 2050 target is not to cut its net CO2 emissions to zero, but only in half, relative to 2005 levels. The industry then claims as either “sustainable”, “carbon-neutral” or “green”, any action taken to meet this unsafe target.

Step 3: Then, to make meeting the target more likely, minimise those aviation emissions that can be offset

All aviation emissions aren’t offsettable within CORSIA’s MBM: aviation’s non-CO2 emissions are unrestrained because CORSIA applies only to CO2 emissions; ongoing CO2 emissions, equivalent to the amount emitted in 2019, remain unrestrained and don’t need to be offset under CORSIA; and not all airlines are part of CORSIA which only starts next year, and participation is voluntary until 2027 anyway, so emissions to that date are excluded. As a result CORSIA will cover less than 5% of projected CO2 emissions from all international aviation between 2015 and 2050.

Offsetting doesn’t actually reduce the total tonnes of carbon in the atmosphere. And aviation offsets do not reduce aviation emissions. Carbon Market Watch reports that “CORSIA alone, even with the highest possible levels of environmental integrity, will do little to mitigate international aviation’s climate impact. … [It] will do nothing to incentivise greater efficiency by airlines and aircraft manufacturers.” Professor Kevin Anderson of the UK Tyndall Centre for Climate Change Research says “Offsetting is without scientific legitimacy, is dangerously misleading and almost certainly contributes to a net increase in the absolute rate of global emissions growth.”

Unlike domestic airlines, international carriers don’t pay significant tax on jet fuel. The Australian fuel excise rate on aircraft gasoline is 3.556 cents per litre, less than 10% of the 40.9 cents per litre rate for road transport petrol and gasoline. The foregone jet fuel tax, in effect a fossil fuel subsidy to aviation, amounts to €6o billion a year globally, according to Green Air Online.

But the 2006 IMF Working paper Indirect taxes on international aviation, concluded “On pure tax policy grounds, the case for a generalized increase in taxes on international aviation is strong.” And Jim Yong Kim, president of the World Bank argued, in 2015, for the repeal of all fossil fuel subsidies. The International Air Transport Association (IATA) is the trade association for the world’s airlines and represents some 280 airlines, or 83% of total air traffic. With international aviation operating across multiple jurisdictions with different tax regimes, the IATA has attempted to lock-in ongoing avoidance of a jet fuel tax through multiple bilateral Air Service Agreements with nations across the world. Rather than setting a single tax rate, these ASAs lock-in tax exemptions for the fuel airlines of international operators consume abroad. In defence of these agreements, the IATA claims that “taxing air transport has no positive impact on the environment but brings a detrimental effect on jobs, competitiveness and the economy.”