An emergency response is not alarmism. It’s a rational, precautionary “due care and diligence” response to an existential risk. 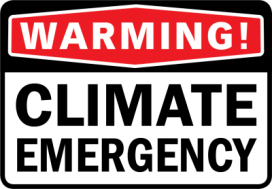 Our house is on fire

“Humanity must choose between taking unprecedented action, or accept that it has been left too late, and bear the consequences.” says Professor Schellnhuber, for twenty years the head of the Potsdam Institute for Climate Impact Research, and a senior advisor to Pope Francis, German Chancellor Angela Merkel and the European Union.

“There is … no documented precedent for the geographical and economic scale of the energy, land, urban and industrial transitions implicit in pathways consistent with a 1.5°C warmer world” noted a leaked 2018 UN draft report.

Emergency action is essential when, as now, events threaten to overwhelm our capacity to respond, when delay increases risk, when failure is not an option, and when the costs of inaction massively outweigh the costs of acting. And when the challenges we face are not amenable to a ‘politically realistic’ response, when incremental changes within a business-as-usual mindset dominated by vested interests, simply pushing and prodding the market, aren’t the fastest way to zero emissions.

Our aviation predicament can help us engage with this necessary emergency response.

Unlike switching from coal fired electricity generation to wind or solar power, and still being able, as normal, to turn on the lights while eliminating emissions… for aviation there is no easy quick-switch alternative to jet diesel that enables us to continue to fly as normal while stopping emissions. Stopping aviation emissions is therefore only possible if we step outside normal.

Like when our house is on fire. We forget the normal, the TV show we’re watching. We do abnormal. Like putting our most precious things in the car and leaving home, possibly for ever. Something we’d normally not do.

Or, like when there’s a global pandemic. We forget the normal, the holiday trip to Paris. We do abnormal. Like stopping flying to prevent the spread of the virus. Something we’d normally not do.

If we’re in a normal world the “stop flying” message is a massive challenge. But recognising we’re in an abnormal world — because we can’t stop aviation emissions and keep flying — makes staying grounded possible.

If we’re in a normal world the “cut emissions to zero” message is a massive challenge. But when we recognise we’re in an abnormal world — because our house is burning — then implementing an emergency response plan becomes possible.

In Australia, in 2017, the Council of the City of Darebin in Victoria adopted a five year Climate Emergency Plan, recognising we are in a state of climate emergency — a world first. And following an Inquiry into the Implications of Climate Change for Australia’s National Security, a report in May 2018 by the Australian Senate’s Foreign Affairs, Defence and Trade References Committee recognised climate change as “a current and existential national security risk … that threatens the premature extinction of Earth-originating intelligent life or the permanent and drastic destruction of its potential for desirable future development”.

As Climate Code Red reported “In June 2018, before the US Congressional primaries, Democrat candidate Alexandria Ocasio-Cortez signed The Climate Mobilisation’s pledge to champion climate mobilization; in October, The Climate Mobilisation proposed to Ocasio-Cortez that she ‘introduce a climate emergency declaration into Congress as a first step toward shifting America into a wartime-level mobilization in response to the accelerating climate crisis.’ She subsequently championed the Green New Deal.”

In 2019 Climate Emergency Declarations continue to be made in increasing numbers around the world by local, state, regional and national governments — a total of 717 jurisdictions covering 135 million citizens as at 29 June 2019.

In the same way that the proof of the pudding is in the eating, so the effectiveness of these declarations will be in the response.

Today, the challenge for us all is to generate broad community support for political and social leadership that enables a national cross-party ‘climate rescue’ government to respond to the climate emergency. Such a government would have the single priority of implementing a safe-climate plan by removing all economic obstacles to fast emissions reductions and drawdown.

Traditional antagonists could unite in generating support: our national defence leaders with climate activists to protect strategic assets such as our water, soil and settlements; farmers and environmentalists around a shared goal of landscape regeneration and associated carbon drawdown; and conservatives and progressives around harm minimisation. With a shared interest in such positive outcomes, the inevitable disruptions and hardships could possibly be more easily endured.